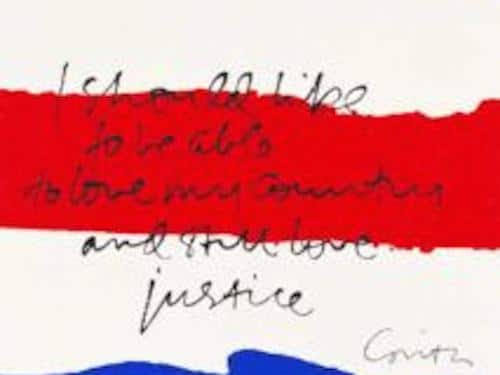 Corita Kent is one of the more revolutionary American artists in the second half of the 19th century. She gained attention for her role in the Pop Art Movement, but is more famous among Art Historians for her use of serigraphs, or silkscreens. She was among the first artists to use this technique, bringing the medium into the American tradition of Fine Art. I am lucky to have two of her original pieces hanging in the entranceway of Stonehurst Place: ‘Cure of the Blind Man‘ and ‘In the Beginning‘.

A fan of Kent’s work since childhood, I didn’t actually add these two pieces two my collection through purchase. My mom, who got them directly from Kent herself, gave these two pieces to me. In 1956, both my parents were graduate students at the University of California, Los Angeles (UCLA). When my mom’s local church, The Immaculate Heart of Mary, needed substitute teachers, my parents volunteered. After their time was up, they prepared to leave, only to be approached by Kent. Then known by her Christian name, Sister Mary Corita, she was a nun at the IHM monastery. She invited my parents into her workshop and encouraged them to each chose one piece of art.

The two painting at Stonehurst Place are thus originals from Kent herself. Quite a provenance! This is actually very rare, since most of her artwork in circulation now are reprints. As you can see in the image, there is a third painting below Kent’s two; that’s a painting by one of her students that Kent included for my parents.

Go ahead, get your own!

I love Kent’s work, and I’ve always loved hearing my mom tell this story. Kent’s surrealist art had an incredible impact on the American artistic landscape, and she herself was a fascinating woman. At the Andy Warhol Museum in Pittsburgh, they held an exhibition of her art in 2015. In their introduction to her, art critics Berry and Duncan talk about her “vibrant, Pop-inspired prints from the 1960s” which “pose philosophical questions about racism, war, poverty, and religion and remain iconic symbols of that period in American history.”

The Corita Art Center in Los Angeles is a wonderful place to explore and learn more about her art. Kent was known for her bright color palette and many times over the course of her career she used red, white, and blue to deliver her message.

One of the most striking examples was Kent’s 1969 piece ‘my country’. In 1976, Kent made several works to commemorate the US Bicentennial. This piece includes the Camus quote “I should like to be able to love my country and still love justice.” The quote appeared in Camus “Letters to a German Friend,” which was published in 1960’s Resistance, Rebellion, and Death around the time of Camus’ own untimely death at age 46.

To celebrate the Fourth of July, the Corita Art Center is offering this hand signed serigraph from an edition of 150 at a discounted price of $295, carefully packed and shipped with tracking via USPS. Go ahead, get an original – this one’s a beauty!